Dr. Michael Hasel will be presenting on Friday, November 21 at 7:00 PM "Archaeology's Greatest Discoveries in the Land of Israel."

"Archaeology's Greatest Discoveries in the Land of Israel" : Were David and Solomon really kings over a vast kingdom known as Israel? Did Jerusalem really serve as the capital of a kingdom? What has archaeology revealed about the rest of the kings of Judah? This evening experience what it is like to go on an excavation and discover the cities of these ancient kings, the inscriptions that have recently been uncovered, and the secrets archaeology is now bringing to light.

Over the past twenty-five years Dr. Hasel has excavated ten different archaeological sites in Israel, Jordan, and Cyprus. His projects have received sponsorship from National Geographic, the Hebrew University of Jerusalem, and major corporations.  Dr. Hasel has lectured widely speaking on university campuses, international symposia, professional meetings in North and South America, Europe, Russia, the Middle East, Africa, and Asia.Currently Dr. Hasel is Co-Director of The Fourth Expedition to Lachish, the second most important city in Judah after Jerusalem.

Dr. Michael Hasel is Director of the Institute of Archeology and Professor of Near Eastern Studies and Archeology/Religion at Southern Adventist University. These two exciting presentations will be held at the Fallbrook Seventh-Day Adventist Church. For directions please click here. 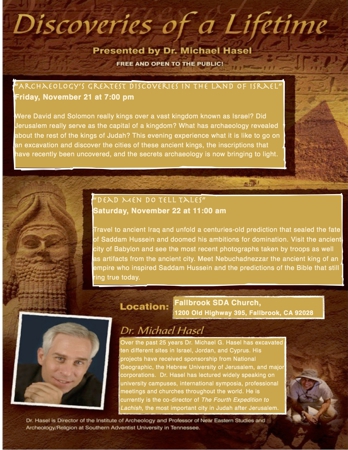